A downloadable game for Windows

As with most tower games available, towers with various weapon types are placed on the terrain to destroy the targets that creep along a select path before they reach the goal. There are only 5 turret types currently available:

There are also player abilities to help decimate the invading force:

Each tower and ability are available at certain maps and are retained once the map is completed.

Before starting the first map, click on “Player 1” in the upper right corner of the Main Menu page. Enter a name you would like to use and remember it as this is, in effect, your Save Game. Any towers, abilities, and maps you unlock are saved locally. Each time you run the game, enter your name and it will remember your progress.

Once a map is loaded, use the WASD keys to maneuver around the map. Hold the right mouse button down to swing the view around. The creeps do not come out until you place the first tower so you have time to look around the map.

There is a floating target symbol that indicates where the creeps will come from. Normally this symbol is yellow until the creeps start coming forth, at which time the symbol turns red. Creeps will spawn with a green health bar color for ground units and blue for air units.

Towers can typically only be placed on non-flat areas so as to keep them out of the creep paths.

As you are placing a turret, there will be an outlined bubble around it that indicates its range. Use this to guide your placement as “time-in-range” is a significant factor for maximum damage. Placing turrets too far from the path will have very little chance to do enough damage to creeps as they move by. However, sometimes placing a tower in the middle of a ridge allows it to cover 2 sections of a path - 1 section as they come by then a second section on the other side of the ridge when the creeps come back around.

You may select a tower to see its details in the lower left corner of the screen and also may direct its fire by then right-clicking on a creep. When a tower loses sight of its target, it will try to acquire a new target so be careful with tower placement.

You may also select a creep to see its details in the upper right corner of the screen.

While a tower is selected, you may click the X next to the detail window or press X on the keyboard to sell the tower. This is handy when the last wave of creeps has spawned and towers placed near the spawn point are no longer required. This will give you some energy back to hopefully be able to place needed towers closer to the Portal Goal.

Even though the tower cost goes up, when a new one is placed, it will instantly be the same level as the highest level tower already in play.

Player Abilities, located at the bottom of the screen, work on a timer and do not cost energy to use. However, a green plus appears above them when there is enough energy available to manually upgrade the Ability. This will only increase its effectiveness whether its damage or slow rate.

The Portal Goal’s health is shown in the top center of the screen.

To the left of it is a toggle switch for towers to target the weakest or strongest creeps according to current health. Towers will continue to fire on a creep it has already targeted until it loses line of sight or manually redirected. The toggle does not force towers to reacquire.

To the right of the Portal Goal’s health bar is a slider used to speed up or slow down the game. This affects player camera motion as well but allows you to manage towers in a crunch.

The gear icon in the upper right corner allows you to restart the map, go to the Main Menu, or exit the game completely.

Best place to keep in touch is on Twitter! 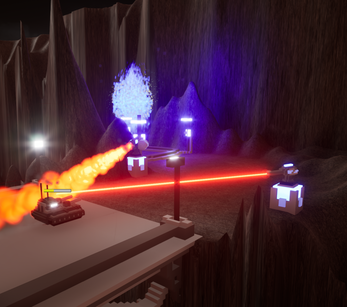 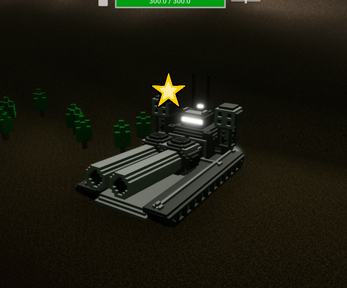 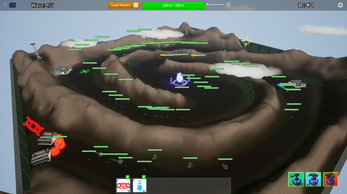 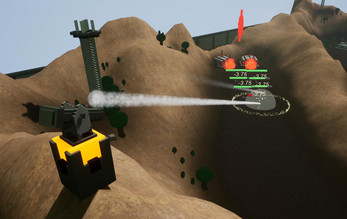 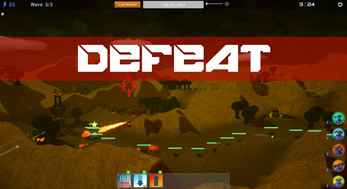 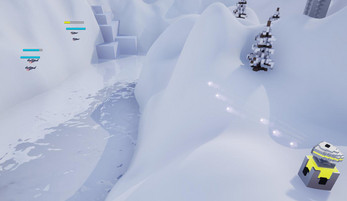 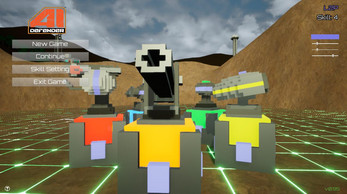